Band-in-a-Box is a music accompaniment software package for Windows and macOS produced by PG Music Incorporated in Victoria, British Columbia. The software allows the user to create songs by simple keyboard inputs: a musical style, a tempo and a key. The screen resembles a blank page of music. The user types in a series of chords, even complex ones, and the software generates a song, typically played by four or five musical instruments. The software can create backgrounds for almost any chord progressions used in Westernpopular music, and can play them in any of thousands of different music styles.[1] The software is published in ten different languages.[2]

Band-in-a-Box was first introduced in 1990 for PC computers and the Atari ST. The creator of the software is a Canadian, Dr. Peter Gannon, for whom 'PG Music' is named.[3] Early versions of the software featured only MIDI data often emulating the phrasing of noted musicians.[3] Later editions included recordings (called 'RealTracks') of real musicians playing real instruments in the user-specified style, key and tempo, a breakthrough in the quality of the music. The developers have enlisted the help of a number of skilled artists as soloists and sidemen to build huge databases of phrases in many styles of music. The software intelligently retrieves and customizes groups of measures that are appropriate for soloing over a particular chord at a selected key and tempo.[3] See example below. 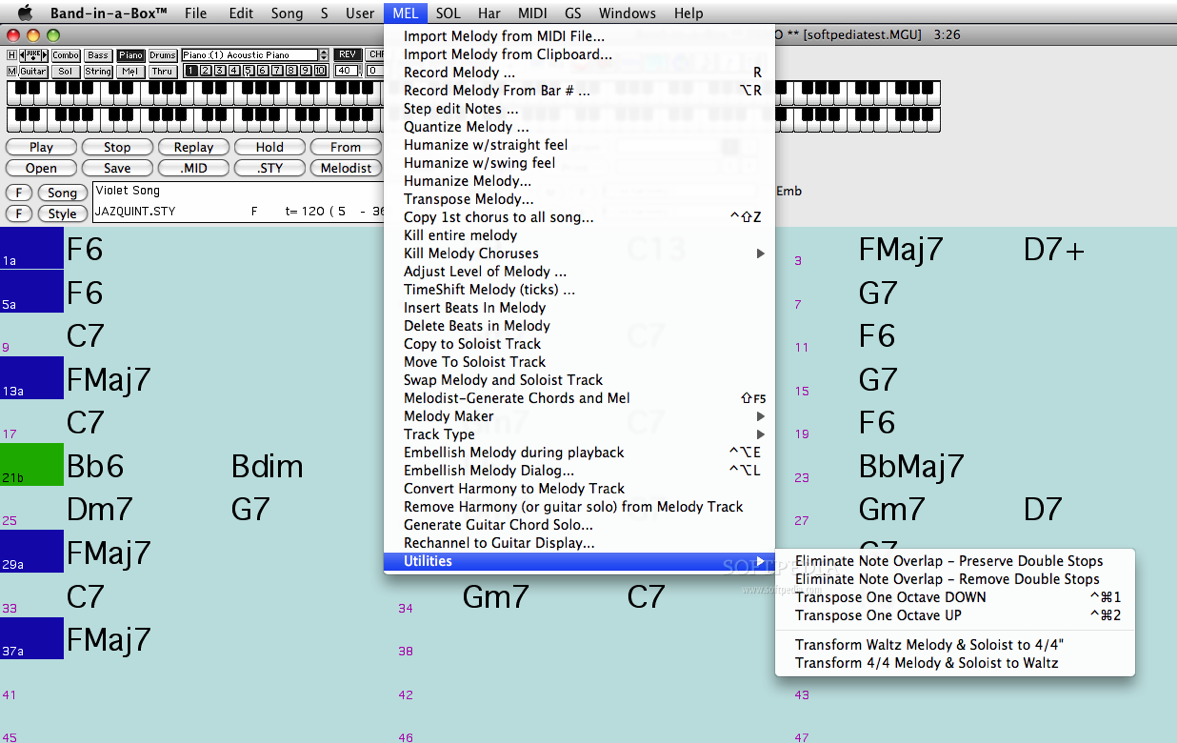 Widely known as 'BIAB' by its users,[1] the software was initially used as a practice aid for musicians but quickly became popular for 'one-man bands' to play at weddings or similar venues. It also became popular in karaoke venues which touted 'Band in a Box Karaoke' in advertisements.[4] Gannon said, 'We started out with Band-in-a-Box as a MIDI program, generating MIDI and synth accompaniments.'[5] In late 1997, the 'soloist' feature was introduced, allowing the software to generate solos choosing from a menu that includes emulations of jazz luminaries, past and present; e.g., Miles Davis or Freddie Hubbard in what reviewer Peter Hum calls 'credible imitations'.[3] Jazz guitarist Geof Dresser, whose day job is a network software developer said,' It's playing hipper lines than I can'.[3] Those lines were likely due to the company's musical director for many years, Vancouver Jazz guitarist Oliver Gannon,[a] the older brother of company founder Peter Gannon.[3] Their father, Joe Gannon, was a professional pianist in Dublin, Ireland, before moving the family to Winnipeg in 1957.[7] Oliver Gannon retired from PG Music in 2008.

From MIDI to real instruments[edit]

Band-In-a-Box used only MIDI until 1999, when digital audio was added, letting users record vocals and instruments directly into songs. The 'Audio Chord Wizard', released with the 2007 version of BIAB, made it possible for a user choose any audio song from his computer; the Audio Chord Wizard then analyzes it and writes out the names of all the chords for it such as Fm7 or G7b9; however, if the imported song is not correctly tuned to standard pitch, the error rate is high.

A songwriter can create backing track, then go to 'notation mode' and enter the notes on a staff to the melody he has conceived, then enter lyrics and play and print the result.[8] Melodies and solos can be generated and these can be edited note-by-note in MIDI form.

A guitarist can input any single-note melody line (no chords) and the software can generate, as a learning tool, a Lenny Breau or Joe Pass style chord solo with chords than the user can actually reach that are shown on a screen window of a guitar fretboard. The user can specify just how close the chords must be, e.g., 'within five frets'.

In November 2006, PG Music released 'RealDrums', which was the first step in providing users with tracks recorded by real instruments. Gannon said synthetic sounds were decreasing in popularity and real audio tracks were becoming so much easier to record.[5]

In 2007, 'RealTracks' was introduced, providing real musicians' recordings to be manipulated to fit any user's song— pianos, bass and guitars, as well as soloing instruments such as saxophones, guitars, and pedal steel, and many others, even double bass solos. RealTracks has significantly increased the quality of the sounds produced since the sounds are, in fact, real instruments played by real musicians. As of 2017, over 100 session players and performing musicians have contributed to Band-in-a-Box.[1] They typically record in five different keys, with the remaining keys accommodated by a pitch-stretching algorithm. The musicians are requested to avoid playing across bar lines if possible on the sessions.

Later versions of the software provide the name the musician who is performing; e.g., the user can select Nashville session guitarist Brent Mason if he so chooses. RealTracks uses the élastique Pro V3 time-stretching and pitch-transposition engine by Berlin-based 'zplane.development',[9] which allows the prerecorded instruments to retain much of their natural sound when the tempo and pitch are varied. Software updates continue to widen the acceptable tempo range.

Audio files can be exported from Band-in-a-Box either mixed together or as individual tracks (one for each instrument) into any DAW for mixing, added effects and mastering. Songs created in BIAB can be burned to CD or copied to media-playing devices.

The software provides these capabilities (some MIDI only) to a music creator (not a complete list):

The 2018 Audiophile Version of Band-in-a-Box

PG Music sponsors a forum which showcases thousands of original songs created by its customers. Peter Gannon said, 'This really helps with visibility because people hear these songs and hear what can be done by a single songwriter using Band-in-a-Box'.[5]

The basic functions are relatively easy to master; but, as evidenced by its 675-page user's manual, there is a long learning curve to get the full benefit.[1] The software user interface has been criticized as clunky or awkward. Reviewer Jeffrey Powers in a 2018 review said, 'it looks like it came from the Windows XP era'.[10] Robert Renman at Master Guitar Academy said the program was 'completely amazing' but called the interface 'quite intimidating'.[11]

Several versions of BIAB are available. Deluxe versions called 'Audiophile Editions' are sold preinstalled on a hard drive and include studio-quality uncompressed RealTracks files. Uncompressed RealDrums as WAV or AIFF files are also available for lossless audio use.

I used Band-in-a-Box (BIAB) for years and loved it – mostly. But I hadn’t upgraded since BIAB 2007. That version is on an old Windows XP laptop of mine that takes several tries to get booted without error. My current computer is a Retina Mac Book Pro with an updated Maverick OS X.

I’ve missed BIAB. Instead of BIAB I tried Impro-visor, a free cross platform tool that has some similarities to BIAB. For free, it’s pretty good. But it doesn’t come close to BIAB. I’ve also tried iPad apps such as SessionBand. Again, these are good for what they are – but they are not a replacement for Band-in-a-Box.

I broke down recently and purchased a cross-grade from my old Windows version to the newest Mac version of Band-in-a-Box. I purchased the Pro edition which is the least expensive. I first confirmed I could upgrade to one of the hard disk versions later. You or I can upgrade for the difference in price if they are on the same version, or for the appropriate upgrade price later. The hard disk versions come pre-loaded on an external USB hard drive. They include many more options for bands and styles. These Hard Disks are plug in play, no installation required. But the cross-grade price for the USB drive starts at $299, so I decided to wait before I committed to that. I am both delighted and disappointed in the new version.

There is an excellent review from Wheat Williams on the Mac 2013 version. I do not disagree with any of his review. But you should read the comments as well if you want a more complete review of the software.

I am going to concentrate on those things that immediately struck me as important or deficient.

The first thing anyone notices when you open the program is how dated it looks. It looked dated in 2007 on Windows. This is a longstanding complaint. My own opinion is this is a minor issue. I believe it shows a lack of commitment to keeping the program fresh or even of keeping an eye on usability. But it’s not really a big deal. I purchased the software for what it can do, not how it looks.

The first things I noticed are features that were present in 2007 on Windows but are missing in 2013 on Mac. I don’t know if Mac never had these or if the 2013 versions of both programs are missing them. I am perhaps more tuned into these items because I had just tried using these features on the 2007 Windows version about 30 minutes before downloading the new version.

One of the newer features are RealTracks, RealDrums and RealStyles. RealTracks substitute professionally recorded audio tracks for the midi that BIAB has used for years. There are still midi options but RealTracks are going to sound better. I’m sure this is an improvement that many have wanted. It makes BIAB more competitive with GarageBand and other audio editing and looping software. But there is a downside if you choose to use styles that include RealTracks. Because they aren’t midi, you can’t reassign the midi instrument being played. One the great advantages of BIAB had been the ease of customizing the backing band. You first chose a style then could mute parts you didn’t need and if necessary you could substitute the default midi instrument with another of your choice. Play the piano part as a jazz organ or take a sax melody and play it as a guitar.

Your options for reassigning or muting instruments is more limited with RealTracks because the parts are from an actual audio recording. There are two solutions to this if you feel the need to get a different band together. First is only use midi styles. The other is to buy one of the hard disk versions of BIAB that has a much larger selection of RealTracks. I’ll use midi for now.

It may seem like I’ve got a lot of criticisms of BIAB but the truth is I really enjoy having my backing band back in my computer. I’ve missed this program and nothing else out there does as good a job at making practice and backing tracks quickly and easily. I don’t want to be an audio editor and patch together loops to make a backing track. I don’t want to “play” virtual instruments to generate a backing track. I want to give the software the chord structure, pick a style, tempo and edit a band and play. That’s exactly what BIAB does.